Goldman & Antin just bought CityFibre for $750M, a rich price. Fiber is back, bigtime. Pension funds and others want long term investments they believe will have a regular return. CityFibre has a deal with Vodafone to build fiber to 1M homes. (Below) With the new investors, CityFibre plans 5M homes. They expect costs under $1,000/home. probably well under.

Enel Open Fibre in Italy just collected $3.5B towards an $8B plan. AT&T has added $1B to raise the 2018 fiber build to 4M. Telefonica is over 15M homes passed, about 75% of Spain. Orange is not far behind in France & Spain. Iliad/Free is now up to 6M in France after a very slow start. Liberty Global is doing millions of lines. Bell Canada, Telus, and even Telefonica Brazil are doing millions more.

The infrastructure funds expect to earn 7-10%, although that's not proven. Secure investments return 3% (10-year U.S. Treasuries) or less (British Gilts.) Hedge funds, buyout specialists, and the like have been disappointing. Trillions of dollars are looking for better investments. (You do know that some years hedge funds, on average, don't even match the stock averages. At least two big ones that were thought geniuses because they avoided the mortgage crash have more recently been disasters.)

Governments can accept even lower returns, so fiber is the right choice for government builds. Private companies require much more; one reason Google gave up on fiber is they need 15% to 25% returns to meet market expectations. Google also massively underestimated customer acquisition costs. Most cable customers are happy enough and it's not easy to get them to move.

TalkTalk, Britain's #4 broadband provider, announced a deal with Prudential M & G, another infrastructure fund. They plan three million lines for $2B. As far as I know, the deal isn't final yet and recent TalkTalk financial problems could derail it. 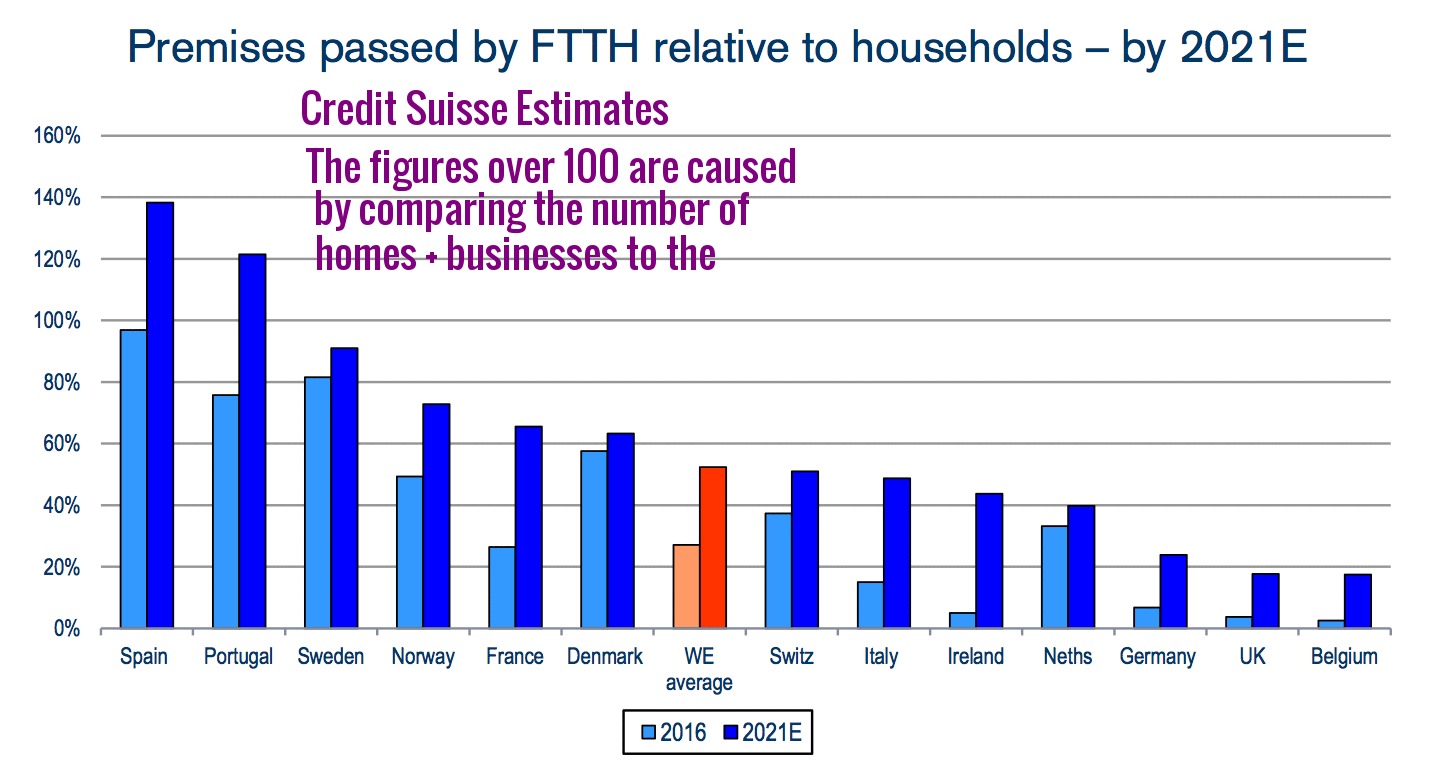 Coventry, Edinburgh, Huddersfield and Stirling next in line for full fibre infrastructure programme

Vodafone and CityFibre have identified the next wave of towns and cities to benefit from a roll-out of ultra-fast, Gigabit-capable full fibre broadband. Residents and workers in Coventry, Edinburgh, Huddersfield and Stirling will be next in line to have their online experience transformed.

Alongside those cities already announced: Milton Keynes, Peterborough and Aberdeen, this brings the total number of homes and businesses identified to date to over half a million premises across seven cities. It also brings CityFibre’s committed infrastructure investment in the project to at least £315 million.

By using fibre optic cables for every stage of the connection from the customer’s home or business to the Internet, users will be offered a significantly superior and more reliable broadband service, capable of Gigabit speeds (1,000 Mbps). Vodafone will use CityFibre’s network to bring Vodafone Gigafast Broadband to customers. Residential and business customers in Coventry, Edinburgh, Huddersfield and Stirling can pre-register for the service from today at www.vodafone.co.uk/broadband/ultrafast

Detailed city-wide planning is already underway and CityFibre is working closely with each local authority to co-ordinate the build and maximise the benefits of full fibre to each city. Currently operating wholesale full fibre infrastructure serving schools, council sites and businesses in each of the new project cities, CityFibre’s spine networks provide a platform to accelerate FTTP deployment to nearly every home and business.

Construction work has already started in Milton Keynes just five months after Vodafone and CityFibre first announced their strategic partnership to deliver full fibre to at least 1 million UK homes and businesses. Construction is set to begin in subsequent cities in the coming months.

Vodafone UK Chief Executive, Nick Jeffery, said: “I’m delighted to welcome everyone living in Coventry, Edinburgh, Huddersfield and Stirling to the full fibre club, with a broadband service like no other.  After five months we are well on track with the joint Gigafast broadband programme that will help position the UK as a world leading digital centre.”

Greg Mesch, Chief Executive at CityFibre, said: “Behind each city project announced today, lie concrete plans, advanced network designs, and the resources to mobilise construction. We also have a significant head-start, harnessing our existing, extensive duct infrastructure that is tailor-made for city-wide FTTP expansion. Our commitment, in partnership with Vodafone, is to totally transform each city in which we roll-out by bringing ubiquitous full fibre to everyone and we are well on our way.”

Coventry:
Councillor Jim O’Boyle, Coventry City Council’s Cabinet Member for Jobs and Regeneration, said: “An investment of this size shows great confidence in the city and having a reliable, gigabit broadband service will be another way to attract and retain businesses to Coventry. With the growing importance and reliance on digital technology, the opportunity of having the benefits of full fibre will soon be available to everyone who lives and works in our city.”

Andy Street, Mayor of the West Midlands, said: “Fast internet is vital for a modern economy. Businesses need to communicate quickly and share data around the world. But in the West Midlands we have a mixed picture, with some of the fastest speeds and some of the slowest. I made working with the private sector to drive up broadband speeds a priority and am really pleased that Coventry is to become the focus of the next Vodafone and CityFibre roll-out.”

Huddersfield:
Karl Battersby, Strategic Director for Economy and Infrastructure at Kirklees Council, said:  “The council welcomes news of this major investment in the digital infrastructure of the Huddersfield area by CityFibre. As a council we recognise that digital connectivity is as critical to a vibrant community and economy as other public infrastructure such as transport. We look forward to working with CityFibre to maximise the potential benefits of this major investment to the residents of Huddersfield.”

Scotland:
Fergus Ewing, Cabinet Secretary for the Rural Economy and Connectivity, said: “Access to gigabit broadband speeds will help Scottish cities continue to attract and retain innovative technology companies, while benefiting thousands more Scottish homes. I therefore welcome this further investment from CityFibre, which is fantastic news for Edinburgh, and reaffirms that our approach to R100 is working. It is also a real vote of confidence in the future of Scotland’s digital economy.”

Edinburgh:
Councillor Kate Campbell, Edinburgh’s Housing and Economy Convener, said: “Edinburgh’s already a well-connected city, but this investment will take it to the next level. Particularly welcome is that households will see a direct benefit for the first time. The additional capability this has already brought to schools, libraries and other community facilities has made a real difference for everyone who uses them. We will work closely with CityFibre to ensure the roll-out is as smooth as possible and residents are kept fully up-to-date with their plans.”

Stirling:
Stirling Council Leader, Councillor Scott Farmer, said: “This project will be a watershed moment for homes across the city. Fast and reliable access to the internet is a cornerstone of everyday life for business and personal use and the roll out of these plans will help equip Stirling for today and the future. This project underpins Stirling’s ambition to have world class connectivity and is just one of the many ways Stirling Council is transforming the area to make sure it is a place where everyone can thrive.”