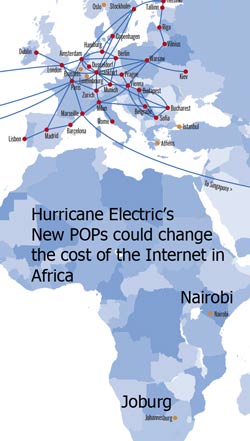 Not quite as low as the $0.27/megabit price in Riga. Hurricane Electric, a major Internet backbone, is coming to Africa. Although they aren't announcing prices, I predict they will offer much less expensive backhaul/transit. Most of the continent suffers from brutally high, cartel-like prices for wholesale connections. If HE prices as I expect they will, that could easily reduce consumer Internet prices by 15% to 35%. In turn, that will allow tens of millions more to connect.

In 2012 at the WCIT, a dozen Africans told me the high cost of transit/backhaul was by far the most important international obstacle to bringing the Internet to more Africans. A friend of mine was quoted $70/megabit for a Gig-E in Lagos last year. The cost in most European or American cities would be between $0.50 and perhaps $4.00. The current high price of backhaul raises the cost of a robust broadband connection probably $10-20 over what it could be.  Even a second-rate service with a low cap is probably $5 more expensive than necessary.

There is a real cost involved carrying data 6,000 miles undersea but that explains only a small part of the 50-1 difference in the price between London and most of Africa. Most coastal countries are now served by more than one undersea cable.

South Africa has five and Kenya three, Take a look at Steve Song's remarkable map. The Africans have been chomping at the bit to reduce the impact of the cartel, but the U.S. has been blocking that at the ITU.

Hurricane offers a $2,700/month price for a 10 gigabit pipe in several dozen cities in Europe and North America, including Riga, Latvia and Rochester, Minnesota. That's on a five year contract. Three years would be somewhat higher. The Africa price will be higher but I believe will create a new market level. The cable middleman must be paid. A Gig-E can serve a thousand robust connections and easily five thousand with low caps. 10 gigs is enough for ten thousand good connections.

HE keeps prices down by doing little advertising and less pr and run lean in all ways. They;ve been around since 1994, were early to IPv6 and other technical advances, and service many world-class clients.

The ISP needs to carry the data from the Hurricane POP to their local networks. Fortunately, land-based fiber nets are growing rapidly. With 700M mobile subs in Africa, the market is booming. Afterfibre has a map worth looking at.

Africa will have more than 315M broadband users, the population of the United States, within the next 18 months. Ericsson expects a total of 500M new broadband users in Africa between 2015 & 2020.

A bit further - All cost figures here other than actual price quotes are my somewhat informed estimates based on scattered details of actual ISP internal costs I've accumulated over the years. They aren't precise. Cost accounting in a high fixed cost/low marginal cost industry is highly subjective. That's especially true here because the decision how to allocate backhaul costs between voice and data varies. Also, expect a lag between the wholesale and retail price changes.

In developed countries with typically robust regional fiber, a large carrier's network cost from the peering point to the local exchange was similar to transit costs. Both seem to typically equate to 3-5 hops worth of switches/routers. So if I double transit costs, which have a competitive market, I get a usable estimate of the marginal cost of the bandwidth delivered to the local exchange. If transit costs $0.27/megabit in the local market, I believe the marginal cost of bandwidth will be well under $1. That's confirmed off the record numerous times by the carriers but very rarely discussed in public. (Because bandwidth is such a small part of broadband costs, any policy discussion that focuses on how much bandwidth a consumer takes is unsound.)

However, as I testified to the U.S. Broadband Commission, rural areas and small companies often have much higher costs. ISPs and telcos under ~ 20,000 customers cannot efficiently buy backhaul in many locations. (That's when I developed some rules of thumb between transit costs and the delivered cost of broadband,) I suspect the effect is even more extreme in African rural areas or where customers are relatively few. I'd welcome any data people might have.